December 17, 2005
Is there going to be a tsunami in Los Angeles? The swell model at Wetsand dictates a HUGE southwest push is coming next week. 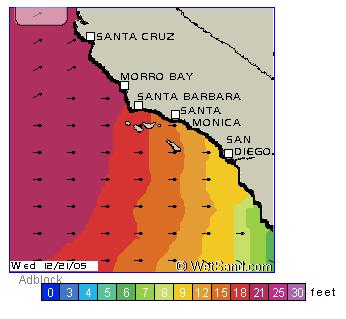 Which means that they are forecasting 38 foot waves. To those people not familiar with wave sizes, these waves are measured Hawaiian style from thier backs. That means the 38 foot waves next Wednsday will have 70+foot faces! Get the jetskis ready! 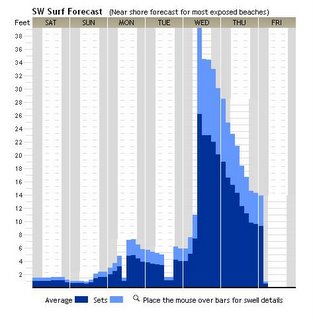 For those who have not seen the movie Big Wednsday about the Malibu surfers in the 1960's (whose huge waves are shot in Waimea Bay, not in Malibu) it is an epic struggle of friendship throughout the years where the huge surf brings them all together. (It has Gary Busey for chrissake!) Will this be the year where they could have actually filmed the movie here in LA where it was set?! I think it might be... albeit up the coast a few miles from Malibu.

When the tsunami hits LA next Wednsday, thankfully one of my crazy friends has agreed that we can 'hide out' in his cabin up in Mammoth Mountain. If the tsunami gets all the way up there, then Katrina will seem like a joke. I'll bring my snowboard just in case there is snow. ;)

Edit: Uploaded photos to the blogger.com service instead of referencing my usc student computing facility page

Anonymous said…
Dude, I can testify: The surf was huge and unforgiving. Lots of Kooks out there...Trying to drop in and getting dumped on their heads. Here's a shout out to the lifeguards who stepped it up a notch!
12/23/2005 8:46 AM

Popular posts from this blog

February 05, 2008
So my desk-mate* and I were having a conversation about an upcoming coding project, and he remarked how nice it was for someone, somewhere to post a complete sample on their blog for the spiders to index, so that he can find it. So I thought I would also, pay it forward and hopefully someone in like 2012 comes by and needs a sample main method using the spring spring framework for application level dependency injection. Everyone out there seems to have used the MVC and deploying spring based apps in a web server WAR file. Except for this link: Levarage Spring Web development with Offspring . [Offtopic: it uses classes in the com.offspring.* package, like the band's website !] It uses a simple bean file and a main method really close to the following snippet to instantiate (that's my new favorite word) the application using the spring context**: import org.springframework.context.ApplicationContext; import org.springframework.context.support.ClassPathXmlApplicationContext;
Read more

April 02, 2008
I am my dad's personal Yahoo! answers person when it comes to things science and physics. So when I received a question on the dual nature of light and matter, I wrote him back a nice long (LFP!) email in answer. I thought I'd share. Question: Sound travels in waves and needs an "ether" for transmission. Light is also a wave but doesn't need an ether. Is light in space "wave" or "particle"? because when light bends do particles bend or this this one of the examples of light as wave? Answer: Sound is a pressure wave. It is the compressing of molecules. It is the compression that is the sound. Light is a wave of electromagnetic fields, fields in this case being force representations. The light wave is a constant of nature in which a electric force changing will produce a magnetic force which will cause an electric force in a stable, repeating way traveling forward. There are other places where electricity creates magnetic forces and v
Read more